So back in the saddle at last.

I went out on patrol in my Xiphos Executioner. Simple scram range kiter, with a single ancillary armour repairer for defense.

It would be fair to say the Executioner is one of my favourite frigates, and hardly qualifies as Amarrian at all. Yes it has lasers, and the shiny hull, and yes it prefers an armour tank. But it's design focus is downright Minmatar.

A slim profile, and basically all engines with pulse lasers attached, this ship is designed to control range and apply firepower. Not much for cheap tricks (although I do have a couple of ideas that might surprise), but a very capable skirmish ship, fighting out in scram range.

A laser boat that can dictate range is king. Your weapons have phenomenal projection in warp jammer ranges, and very strong damage output. A speedy ship with lasers on it needs some kind of unusual strategy to counter it, be it dual propped Firetails, sensor damped kiters or neuting Slashers.

A little interesting fact, tracking on pulse lasers being what it is, you'll hardly ever want to switch from Scorch. Unless you ca be sure of an orbit at 4km, you'll be far more effective using Scorch. Less than 4km, and you'll be hitting nothing anyway.

And also... have you seen this thing in Matari space? 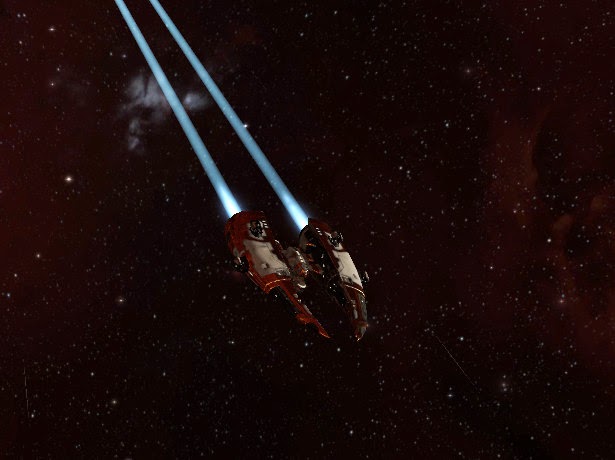 Crimson metal... I love it!

I warped out of Hek and entered the warzone.

A few jumps in I saw my first complex. A novice, with apparently some Rifters sitting in it. I eyed up local, and it was full of people doing things.

Nothing else for it... I had to check and see if they were friendly, and jumped in to the plex. Damn the odds, I've got a job to do!

I locked them up, and orbited at 8km, lasers blazing away in the void. Shields stripped quickly on both sides. Armour Rifters, meaning this was going to be a close fight. And 2 vs. 1 meant the tough was all on me.

Bullets rained in from all sides, but the Rifters could not close distance on me. The first one popped, and although my nanite paste had run dry, my little Executioner hadn't broken a sweat!

It was close between myself and the last Rifter. My capacitor eventually depleted, and he got away,

The plex was mine! But with weapons overheated and nanite depleted, I was in no position to hold it. I warped out to my perch.

Good fights were exchanged in local, and the two neutrals showed themselves to be some fresh faced university graduates trying out the Warzone for fun. Not a particularly grand victory, but not bad for two on one!

I gave them some advice then went to find some extra nanite paste. This ship was not allowed to make it back to Hek. And of course, this kill puts me no closer to getting to the next rank in the militia. Still have some work to do!

Good luck in the future Gardner Khronnus and your buddy whose name I didn't catch! A little more training and you would have had me. I recommend switching to Slashers right now. Rifters are excellent with Barrage, but if you can't use it, the knife fighting Slasher is a little easier to use.

Never underestimate the enemy... but equally, never forget how capable you are.

Posted by Tabletop Teacher at 01:48