Maths can tell us a lot about how the universe works.

Well, that's not quite right. It helps us describe the things we can see happening without spending a huge amount of words to do so.

Perhaps the most used maths equation in New Eden describes how turrets work. And at first glance, it's a fairly daunting one:

Note that it's 0.5 to the power of all those other bits, not 0.5 multiplied by the other terms. That's important.

Now it looks really complex, and in some ways it is. However, by unpacking all those terms we can see that it's not all that scary, and will go some way to explaining your own intuitions and feelings about how to fly space ships.

However, I realize not everyone gets a kick out of doing maths, so I'll include summaries at the beginning of each post so you don't have to sift through all the numbers.

Now lets do some maths.

Here is an overview of how turrets operate:


X is always going to be a number between 0 and 1.

The way damage is calculated is a further calculation based on X.


So in the above example:

What does this tell us? If we have less chance to hit, then the damage of our shots will also be quite low.

If X is higher, we can achieve more damage. They're just harder to get a hit.

The exception to this are wrecking shots. These occur when X < 0.01. At that point, the modifier is 3, the New Eden equivalent to a critical hit. This means even if you have a very tiny chance of hitting a target, you still have a 1% chance at doing some damage.

To imagine it another way, every 100 shots you should get at least one hit. Line up 100 Tornadoes with one artillery canon, and at least one of them should be able to get a shot on an interceptor in range.

That said, the equation suggests that turrets have infinite range. I'd like to run a test one day, seeing if this is the case, seeing if an Executioner at 100km would be able to hit another ship with pulse lasers. Should only take about a thousand or so shots to see if this will happen.

All this is base off the equation on Evelopedia. If it's known to be incorrect, let me know, before I waste my time writing about it. I had fun unpacking it for myself, but there's limited value in writing about it for other people to use.

Also, picture of a Punisher: 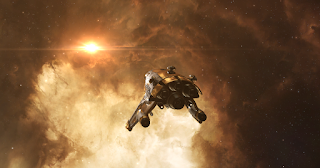 No reason, I just thought it was pretty!

Posted by Tabletop Teacher at 05:05