There is  mysterious shuttle orbiting the sun in Geztic.

It flies in an orbit around a beacon, almost on top of the sun. Aura, the ship-board computer, registers it as a pirate target, displaying it as a red cross. 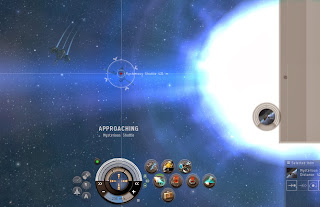 It doesn't respond to hails, weapons will not fire on it, nor do any modules. After some reading, I found other capsuleers found that using ECM on it seemed to affect it. Which is curious in itself.

Aura states that there is a single life-sign, which shows signs of a cryogenicaly frozen mind.

If you're curious, I do suggest reading more about what other capsuleers have written. I only note it here, since it was the most interesting thing I found in the Khanid region.

I found it unsettling. Such a mysterious, and apparently indestructible, ship, barely 5 jumps from the Khanid homelands... and within 10 jumps of all the other major households Prime systems.

Far more scholarly men than me can surely make more sense of this. I simply find it disturbing, and too close to home.

Posted by Tabletop Teacher at 02:55