Fall off is a difficult topic to think about, and the maths of it quite beyond my feeble arithmetic skills.

However, in this modern age of information sharing, I can use the work of others to support my own investigations. Thanks to Eve University for a most informative page!

For a better understanding of how this effects damage projection, we will look at some arbitrary ranges, and see the projected DPS for each. Bear in mind, my maths is quite bad, and this are only rough estimates. If you'd like to do the calculations yourself, please do, and I'll update this page! This is only for auto canons.

The four ranges will be about half warp scrambler range, then about scrambler range, overheated web range,  a close kiter range (about the Kontos operating range) and then warp disruptor range.

One more thing: these calculations will also apply to both the Slasher and Firetail. 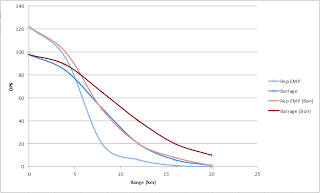 Forgive my wobbly lines. My maths is far from perfect.

As a little aside, it does neatly show what ammunition you should be using at each range. About 5km is the turning point. I'll make another graph later on to show a comparison to blasters and pulses. Then I can more thoroughly explain Rifter tactics.

On with the bonus.

There is much greater damage application, but with the tracking problems mentioned before. Good firepower. It certainly has the edge over blaster fit frigates, but slightly less of an edge over laser boats. It would certainly give scram range kiters a shock!

It even has the option of using close range ammunition against scram kiters. Interestingly enough, the bonused close range ammo almost mirrors the DPS curve of unbonused Barrage.

Artillery Rifters would be even a huge amount of kiting ability, giving fairly high firepower into ranges only matched by specialist range ships. They will comfortably operate outside of scrambler range, and above dirsputor ranges.

I like this idea, but since the Slasher is faster, it could make much better use of the kiting range increase. It's a great bonus, but on the wrong hull. There also isn't a significant cost to using artillery on the Rifter. The fitting is a little too comfortable. The Slasher would have to make a lot more concessions in fitting modifications, meaning a lot more balance.

I'm also concerned that the loss of tracking would pretty much negate the benefit of the increased range.

I'd like to consider a slightly more radical proposal: The four gun Rifter. We'll look at that next time.

In the meantime, please post your thoughts about the above. Agree? Disagree? Think I should go back to the Academy to re-take mathematics? Let me know.
Posted by Tabletop Teacher at 21:01