Jove, Sleepers and Talocan have all been known to be able to manipulate wormholes, even before the Seyllin Incident. So far the only explanation for this is that they are ancient races in possession of handwavium, allowing them to do so. But if you've agreed with me so far, you're ready for the big reveal.


For our current natural wormholes to appear, you need a source of gravitational wave. For capsuleers, this was provided to us by the Seyllin Incident, literally thumping reality hard enough to produce the waves.


The Drifters, Rogue Drones and Sansha have all demonstrated their capacity to at least control static wormholes with structures in space. I've assumed that these are, in fact, wave generators. However, we know that some Jove and Drifter ships are capable of producing wormholes on their own, perhaps using on board generators.


But what if you were an advanced civilisation, with the capacity to build structures such as the Jove Dyson cloud? Would you be satisfied with only being able to use natural gravitational waves to travel through space? Like sailors before steam engines, you'd be at the mercy of the winds. What if there were some way you could generate waves enough to supply a system? What if it were big enough to supply a whole cluster with a steady supply of gravitational waves to form standing wave bridges? 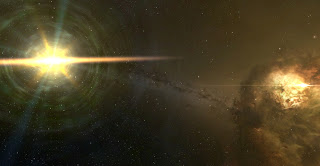 
Think again back to the Seyllin Incident being a stone thrown into space-time, causing these ripples. Usually these oscillations would simply disappear over time, the energy lost by the moving wave. The reason we still have the effect of wormholes, and indeed the increase in wormhole activity, is that something is adding waves into the cluster.


Again, a practical examples would be this; go to a sink, and fill it with water. Put your hand on the surface, and push up and down gently. You'll soon start to see the water moving up and down like crazy, forming the peaks and troughs of standing waves. Your hand, in this case, represents the EVE Gate.


Now we know why it is impossible to approach. The storms raging around it is the quite literal upheaval of space-time. Ships that approach are likely to be shaken apart by the gravitational stress.


In the beginning, this was quite stable. But now, as time goes on, the technology is starting to fail, and the wave generator experiences some periods where it does not oscillate at its maximum strength. These are the periods which allow the Sisters of EVE, or just the curious, to go and look closer.


Some of you will now say that we know our ancestors passed through the EVE gate to enter the New Eden cluster. I don't dispute that. However, I can say that perhaps the wormhole they passed through was not the Gate itself, but probably a wormhole produced by resonating with it.


And now we can say why the EVE Gate is perpetually producing light. It is the energy given off by the frequent oscillation in space-time... an effect we see mirrored in other wormholes.


That's pretty much the end of what I have to say about my hypothesis. It's probably not the explanation for how things actually work in New Eden, but it was a very happy thought I had, that seemed to get everything to line up. In any case, I hope you had fun working through my mad ramblings. I also hope you picked up on some real world Physics, and maybe are a little inspired to go and find out more.
Posted by Tabletop Teacher at 00:31