So I was curious about this, since I read someone talk about the Observatories being more concentrated in Curse. So what is the actual concentration of observatories across New Eden?

I started off by recording my own findings in Derelik, simply listing the observatories I found. Realizing this would take me months, I instead did some research to see if someone had done the work already.

Thanks to these guys who did the grunt work. Saved us all a lot of time!

So, from there it was a simple analysis: divide the number of observatories found in regions by the total number of systems in each region.

Here's the results for Empire space (rounded figures of course). 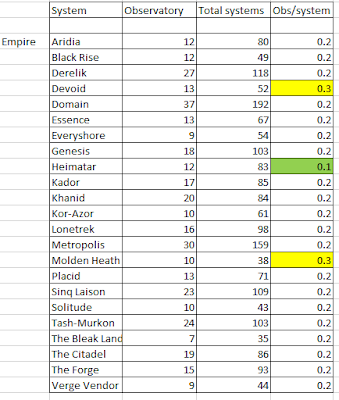 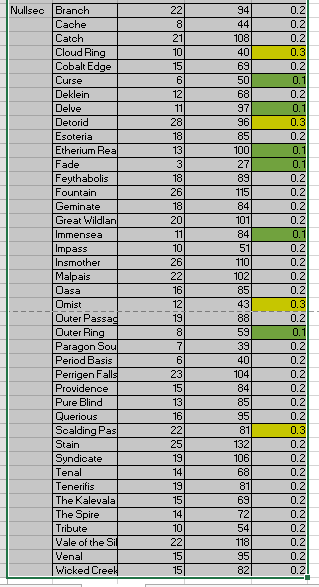 Conclusion:
Pretty evenly distributed. The outliers aren't really that that compelling, and Curse actually has less observatories per system than others.

That doesn't mean we can't learn anything though.

The spread across space is even, both in Null, Empire and Pirate space. From this we can say that the Jove were watching everyone. And with equal interest. That's not to say the density of information collected is evenly distributed too, but they were quite thorough in casting a net over the whole cluster.

Which is curious: What would be the point in having such a massive station to observe a fairly minor flow of traffic? Smaller stations or even scout ships would have been much more efficient.

1) The Jove installed these stations in advance just in case humans moved into it at some point. I can only assume their resources must be massive to build in such a redundancy.

2) The observatories have another function beyond observing humans.

With the assumption that antikythera is used to observe cosmological events, I put forward the hypothesis that this is in fact part of a large observatory network, to look for a cosmological, but elusive feature. Having a net this large, with faster-than-light communications between them would make a telescope of phenomenal resolution.

So this would lead us to look at just what information these stations collected.

Posted by Tabletop Teacher at 06:17