The difference between a lore hound and a scientist is working solely from observable evidence. That's not a detraction from those who relentlessly sift through the antiquities and ancient texts of New Eden. However, as scientists we can't rely on witness statements. We need some hard evidence.

Here's the start of our data points: The Jove structure themselves.

The description is as follows for the Jove Observatory:

As evidence this is not compelling... we have no source for this particular description. We can't even be sure this is an observation outpost! But we'll call it that until we have a better name. 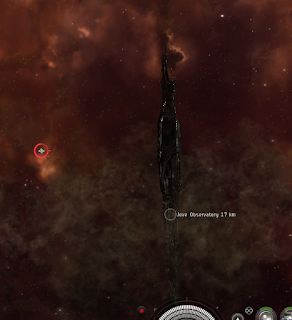 It's more likely that this dust was ejected from the structure itself through some internal catastrophic failure. Which brings us to this: 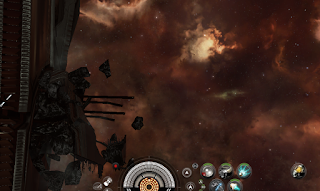 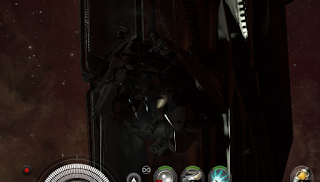 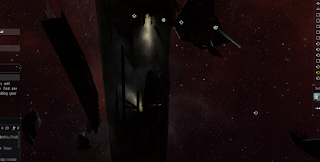 Note the angle of the girders. These sites of damage are most likely from internal explosions rupturing outwards. We could argue that smaller external impacts breached the hull leading to explosive decompression. However, we are missing other impact sites we'd expect from either combat or meteor showers.

Another interesting point; see the the gasses being vented? The lights still on? These stations are still operational. More or less. The cloak is down, but the power sources are still on. So where is the station crew?

Further evidence for internal explosions; these damage sites are common to all stations. This shows a sudden, network-wide catastrophic failure of certain components.

I left a mobile depot going into reinforced mode in the top picture. I was juts curious if that was done by the circadian sleepers or a player.

The observatories all suffered sudden catastrophic failures in at least three systems, one of which must be the stations cloaking device. This may not be linked to power supply, as some of the stations systems still appear to be operational.

Where are these observatories placed?
What are they observing: capsuleers, Empires, or natural phenomena. Are we just looking at a cluster wide radio telescope?
Is the damage consistent across all known observatories?
Posted by Tabletop Teacher at 04:19