Whilst looking through exotic matter hypotheses to solve our antikythera conundrum, I re-visited my old literary stomping grounds of wormhole theory.

I'll get the connection out of the way, so that others can begin wild speculation: traversable wormholes, in order to satisfy general relativity, need some exotic matter of negative density to keep them open. I won't even pretend to know the details or the maths behind it, but I may come back to it at some point.

The tinfoil bait? Antikythera could be an exotic material used to keep wormholes open.

Not really so far-fetched an idea. Our jump gates rely on similar technology. However, since its being used to make Entosis links, it does look unlikely.

Either way, I started looking at wormholes again.

Like any true nerd, I grew up thinking I knew more about the universe than I actually did, and delusions of my academic prowess led me towards reading Physics journals far above my level. Needless to say, I did not understand half of what was there.

And I still don't.

This is a problem.

Especially since I just used a wormhole to get from Molden Heath to Genesis yesterday.

And I get the feeling that wormholes are going to play an even more significant part of New Eden's development from this point on. 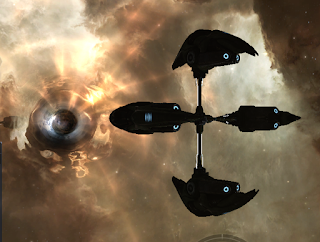 And I think looking a little more closely at this theory would help us to understand just what the EVE Gate is.

And to keep things at least a little interesting, I'll get some pretty pictures of wormholes to go with it!
Posted by Tabletop Teacher at 05:15