I actually only managed an evening or two of ratting, with half an hour spent each night. My schedule doesn't allow a great deal of time to be in space. The area I chose had a nice selection of battleship rats and clone soldier recruiters.

Sadly, I did not encounter any Mordu's Legion ships.

Overall, not a bad haul. Within about an hours worth of ratting, I ended up with a good haul of lot, including a bunch of clone soldier recruiter tags. 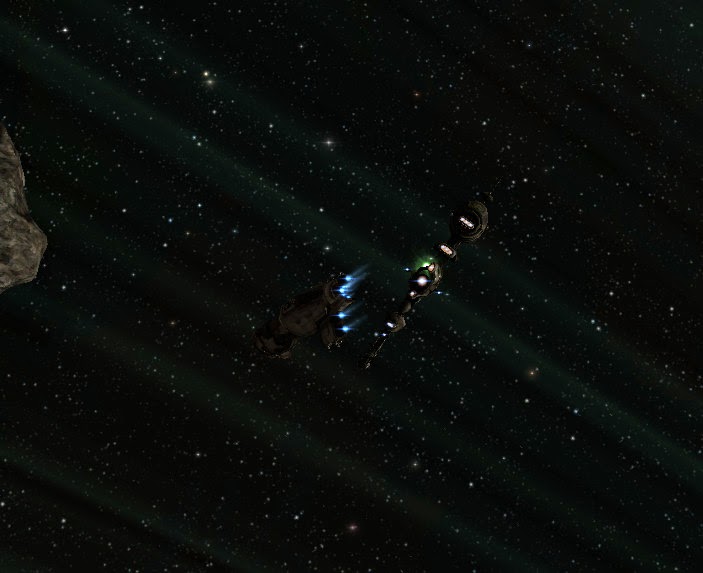 The ratting itself was fairly easy. I got a little practice in closing the gap between myself and a target, and the Omen held up well against the incoming fire.

It did however, take some damage to armour. I was never in danger of having that armour breached, but it did mean some trips back to station to repair it. I think in future one of the resistance plates could be swapped out for a repairer, for in between belt reps. You lose out on capsuleer combat ability, but you gain in sustainability of patrol.

Honestly, if it weren't for the laser-fit pirates, I probably wouldn't use an armour cruiser for this work anyway. After some thought, I'd much rather take a shield cruiser that was lighter on it's feet, and with better regeneration. I think next time I'll try taking a Rupture out. Projectiles aren't ideal, as you need to carry ammunition, but flexibility in damage type may be better in cross-region patrols, as might be the case in my next project.

Or just take a Vexor. It's the better choice, and if I wasn't so stubborn about not following the herd, I'd be using it too.

It's not worth your time to shoot the frigates. Their drops are't stellar, and their bounty pocket change. You're better off moving on to find other, more profitable targets. Even the non-clone tag cruisers are better left alone.

Across the two days, with a total play time of an hour, I made 11 million ISK. Not bad at all, and a much closer trip to get the loot to market. I also didn't have to live out of a depot to do it, putting the Great Wildlands to shame.

It's only a brief snapshot of the rating lifestyle, but so far, it's promising. If I had found a Mordu ship, that profit would have been huge. I have to admit, I kind of like it.

But I have a task to do in a wormhole. Back to Hek to pick up a battle-cruiser!
Posted by Tabletop Teacher at 06:12