Less of a factual post, this is more of a framing device for imagining New Eden's weapon systems. I tend to think of each star-ship in terms of conventional hand held weapons. 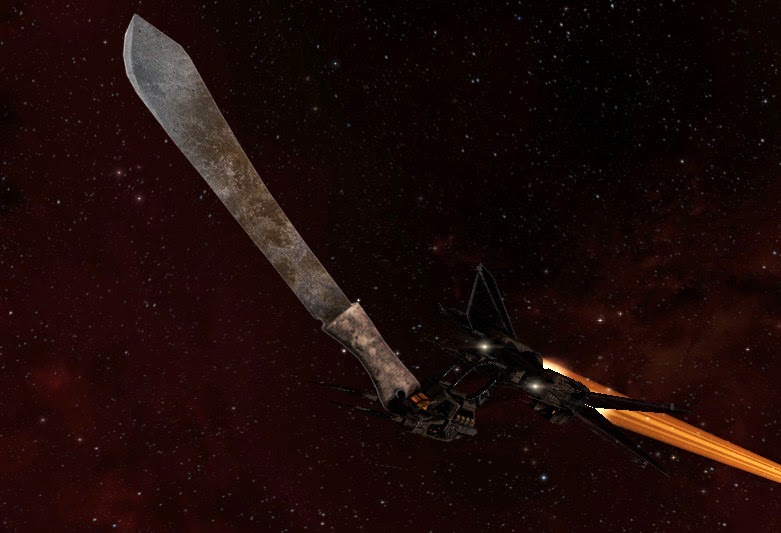 Honestly, I find it hard to conceptualize falloff and tracking, at least in real terms. Trying to hold all those numbers in my head means they start leaking out my ears. It's certainly impossible to work it out during combat.

Weapon systems also change their use from hull to hull. But keeping a group of weapons in mind whenever I encounter ships in space, allows me to react accordingly.


It also gives us a frame to understand the mystery of the Rifter's unpopularity.

So lets start with the easy one:

I've written several times how I equate these weapons to lances and polearms. They are excellent weapons of war, and perhaps the best example of a real military grade weapon.

They have the best operational range, able to damage at a distance well beyond the reach of other weapons. This is just like the spear. You're able to keep your opponent at arms reach, and you have excellent control at this range.

The ability to switch to point blank faster than other weapons is also shown here. A spear can be swiftly drawn back to a closer grip faster than most other weapons. If you're curious, take a stick, and hold it like a spear. Draw it through your dominant hand to a shorter grip. See how fast that was? Of course your control is limited at this range, but so is pulse laser tracking.

Spears had their roots in hunting tools, and again, lasers are one of the more popular NCP hunting weapons.

I've never really used blasters, except once in my youth when I thought the Thorax was the best looking ship in New Eden. But ask anyone anything about blasters, and the ridiculously high damage usually comes up. Blasters blast things apart, just as axes were designed to do.

Axes gained popularity around the same time as chain mail did. The reason being, axes were high impact weapons that could pummel a chain mail user, and even hammer past shields. That's not to say they lacked finesse, but that's what their purpose was: close-range high-damage.

You could also use it to chop wood. Most people living away from civilization centers prefer an axe over other weapons, simply because of it's utility. We see this quite clearly in New Eden, with various ratting Vexors and mission running Dominixes. Blasters are extremely quick to clear NCPs, and a baying pack of drones neatly wraps up the image of a hunter.

You can argue the Atron treats blasters as longer range weapons. You're right. I'd call them poleaxes.

The downside of axes was the lack of protection for its user. No hand guards, and a fairly vulnerable wooden handle meant that a competent opponent could hurt the user, or weapon easily. This was true until the blaster boats got their full-plate armour in the form of tanking bonuses, and a flat increase in hit points.

Anyone who's flown a Slasher knows the seductively little dance of slipping in under an opponents guns, and jabbing them furiously at point blank. The Slasher is just what it says it is; a knife fighter. Utility highs and e-war fits show this little ship to be an utter scoundrel, cruelly closing range and attacking mere inches from the enemy. And it works extremely well.

If you intend to go pirating, you can't do much better in terms of theme than the Slasher.

And the Rifter? Rifters used to be long swords. Able to jab at full reach with Barrage, and then cut more vigorously at close range. In a universe defined by the three ranges: close, scram and disruptor, the Rifter could cope well at two of these, particularly since the other ships lacked the practicality in application of the Rifter.

Long swords, especially those with longer points, could more easily find the gaps in armour. This is represented by the ability to choose ammunition, to find that resist hole.

These days? Other weapons developed, and the Rifter went into stasis. Unsurprisingly, it became less popular. No one needed a plain heavy long sword when the modern axe could hit harder with decent armour to back it up... particularly since the axe users became either lighter on their feet, or started using hunting dogs.

It developed into the rapier. The weapon became a long thin piece of steel, more designed to thrust at long range, into falloff and scram range, but still heavy enough to cut. It was still better than a spear (Punisher) at close range, but nothing like a knife (Slasher) or an honest axe (Merlin/Incurs).

Which is a promising start, but it carries with it the flaws of the rapier. They were not primary military weapons. They were excellent sidearms, being easy to carry at the hip, but aside from a cavalry sabers, the majority of soldiers carried either spear,musket, or some kind of weapon to deal with either (axes being commonly used to chop spears into kindling).

Moreover, it can't full utilize the rapiers advantage. It can't easily find those gaps in armour. Reload times for projectiles are 10 seconds. Yes, you can hunt for those resist holes, but you're going to sacrifice nearly a quarter of your armour to find it. And the Rifter doesn't have much armour to spare.

And without that armour piercing capability, the relatively small damage advantage at range the Rifter has is irrelevant.

The Rifter is a blunt, and over-weight rapier. Yes, it can do reasonable damage at most ranges. But it can't react to its enemy as it should be able to. And even then, it can't leverage its advantage well. Furthermore, it's too bogged down by armour to dictate the ranges it likes against lighter ships.

It's still a good ship. It's just much harder to use effectively than other frigates.

Well, that's fairly common knowledge. Everyone knows this about the Rifter.

We could petition designers to alter bonuses (and I'll post up later on my recommendation for that). That takes time though, and does nothing for our Rifter now.

Or we could break the rules a bit.

And we draw our influence from medieval Scandinavia.