Today is an example of a project that you work towards, but fizzes out at the end. This was part of the ongoing project to run a Sleeper site (and potentially see a Black Hole!).

So far I've only crossed a few things off my list. Not doing so well.

I got back to Hek, and in a fit of madness decided to take a Hurricane to wormhole space instead of a Harbinger. To be honest, there's not much difference between the two hulls in terms of damage output, and running a shield tank leads to similar levels of survivability on both.

I recently did some number crunching on projectile fall-off, and realised that operating ranges for projectile ships was actually pretty good. I usually dismiss them for NCP clearing purposes, as lasers and drones have a very good edge when it comes to sustainability. However... well, just look at that Hurricane! 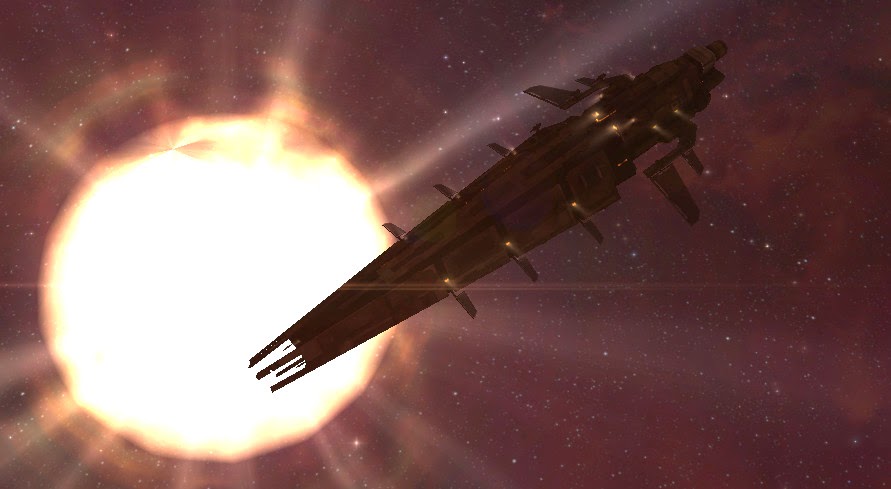 No doubt one of the better looking ships of New Eden!

Fitting was a relatively simply task too. For this little trip I'd be taking advantage of the Mobile Depot, taking modules for scanning and evasion on top of what I'd need to hunt the Sleepers. Fit shown in the picture, along with all the tools for the job. 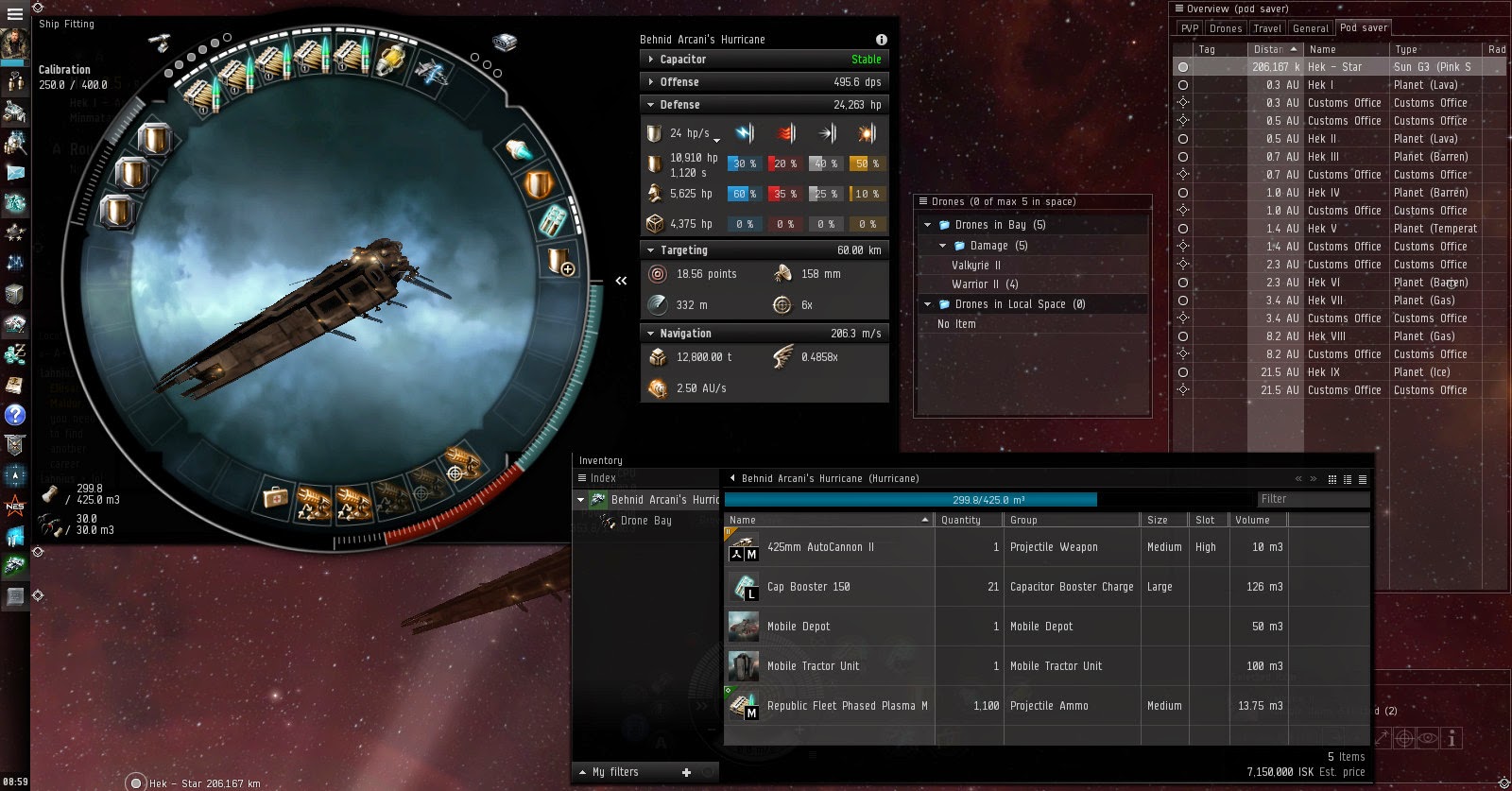 Lows were the simplest part f this fit. All damage and target projection, with mids hosting the relatively meaty shield tank.

The shield tank itself is non-standard, both for current wormhole preferences and for NCP hunting. Shields, barring passive Drakes and Tengus, are not all that popular for wormhole work, with capsuleers favouring the stronger resists of armour. Capsuleer combat, as Rhavas outlines here, tends to work at relatively short distances from wormhole event horizons, so the slowness of armour tends to not be an issue. (As an aside, he mentions low-sec tends to prefer nimble shield tanks... I can't say if this is true, as I've seen a good mix of both, but the reasoning is sound, and worth exploring.)

I chose a shield tank, however, to clear the site quicker. My experience in low-sec has taught me the best defense is avoidance, and clearing a site faster means less time for an unfirdnly capsuleer to catch you. The tank itself is a standard buffer; extender plus invulnerability field, with Anti-em rig and extender rigs. The non-standard part was a Large Ancilliary Shield booster.

The theory was to make the fit as independent of capacitor as possible. The buffer is there to absorb fire whilst the shield booster reloads. incredible unsustainable, due to the size of cap boosters, but I didn't intend to stay in the hole for very long.

All gank and burst tank, my strategy was to blitz unknown space; to blow in fast and hard like... well, like a hurricane.

The deployables are a depot to refit, and a tractor unit to loot faster.

I scanned down the nearest hole, and hopped inside. C3, full of anomalies. All of which had rocks. As my bad luck would have it, the only anomalies in this system, barring two combat ones which seemed too challenging for my untested battle-cruiser, were mining ones.

Fortunately, these anomalies still have sleeper patrols, usually entering on a timer. So, I refit to combat, leaving a cloak in the high, and warped in, excited for the hunt! 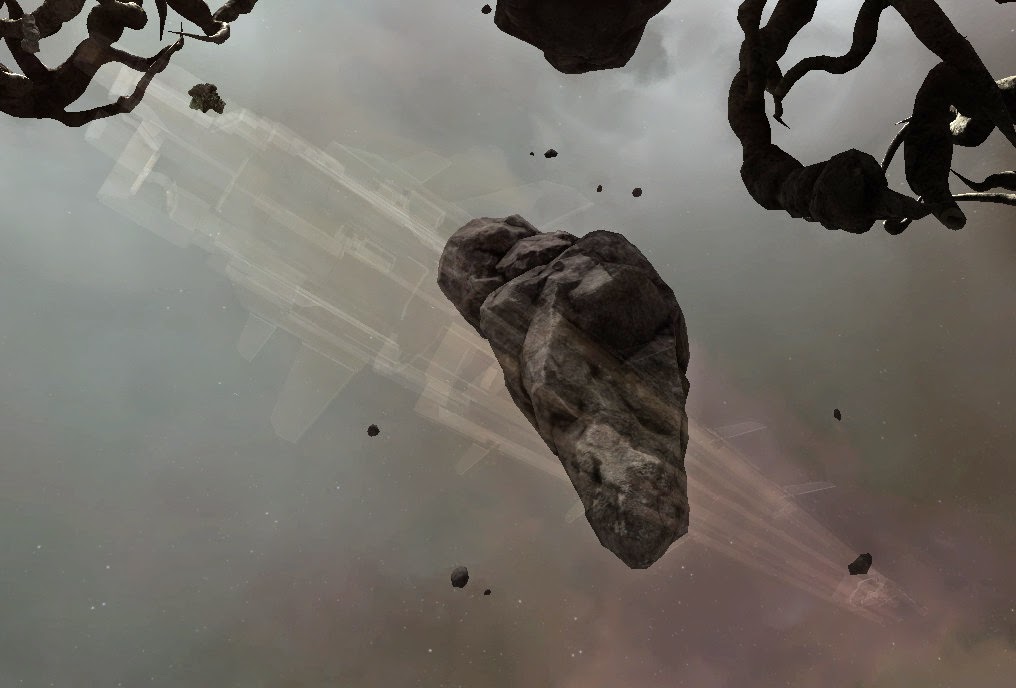 And soon my allotted time in space ran out. Duties back in the known world called out to me, and I had to leave.

Extremely disappointing, but not necessarily a waste of time. The ship was fit and ready to go. Next time I attempt to do this, all I need do is un-dock (and hope for a lower rated wormhole!). Projects in New Eden can go this way sometimes, and even the most careful planner can have unexpected events throw a spanner into the gear system.

Well... no matter. Although it did give me a new thing to put on the list: go mining in a wormhole! Honestly, they look empty enough for it.

Posted by Tabletop Teacher at 18:43