I was patrolling around in my Rifter the other day, when I realised a big gap in my knowledge. And it was a fairly crippling gap.

The Rifter is still very much unloved by capsuleers, or at least under-used. Part of this is due to a shift from dare-devil piloting to a more mature, and reliable flying style offered by the Tristan. The Fat Man's drone bay allows for relatively easy counters to an unexpected opponent, and doesn't require such light-footed reactions for piloting.

In short, capsuleers are showing their age. Passions of youth give way to the more cool responses of maturity. 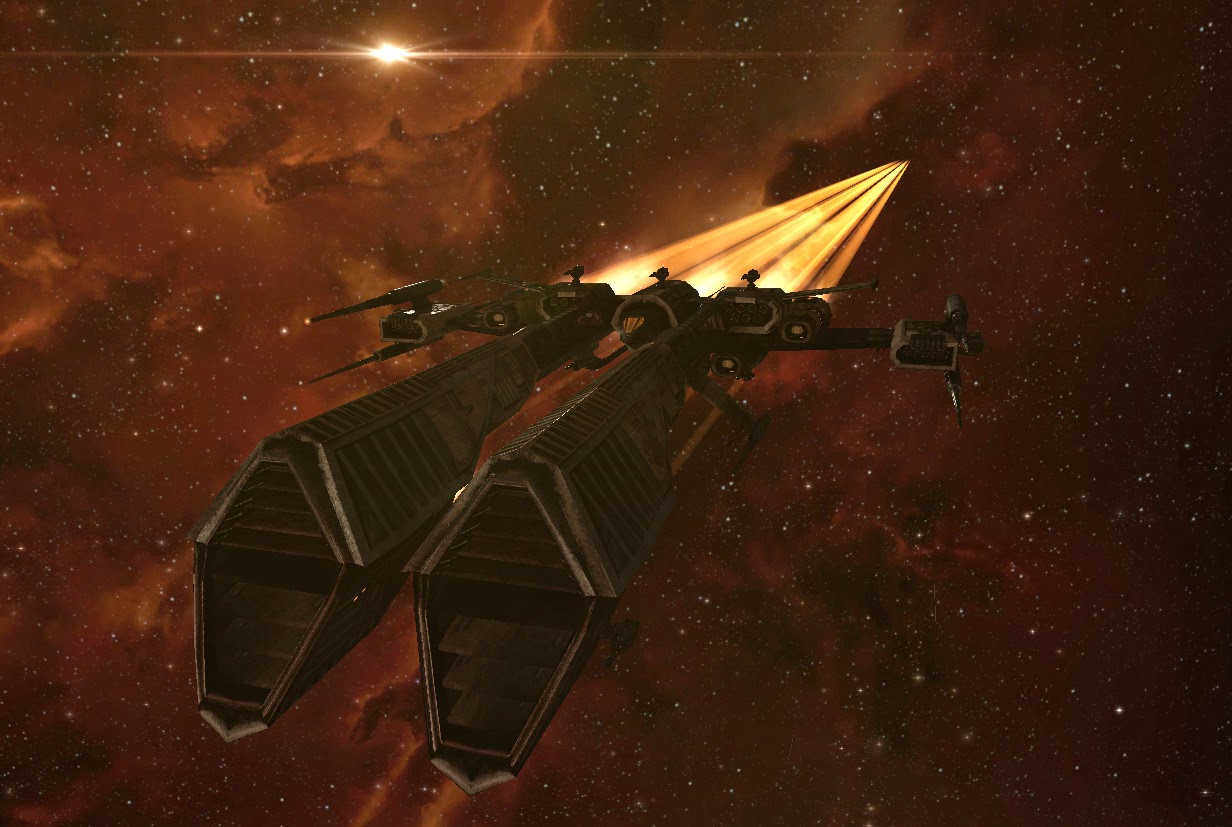 But lets deal with the hulls themselves. A while back the Rifter was re-engineered to have longer ranged autocannons, at least as far as falloff was concerned. I was initially pleased, and excited about the possibility of an autocannon true kiter, operating out to disruption range. More on that later.

However, it still hasn't done the trick. New Eden still distrusts the Rifter. And I know why.

I was hunting for targets. Several frigates popped up on scans, and I noted there were a lot more pirate and navy ships fluttering around these days.


You can see my problem.

Whilst I knew the Rifter's advantage lay in scram range kiting, I didn't actually know how good an advantage that was. Thus, I didn't have the confidence to take my ship into combat. I feel that many capsuleers are the same, and are not eager to go find out for themselves, for fear of embarrassment. I always think flying smart is just as important as flying bravely, and taking a ship into a bad situation without knowing what you're doing is fairly dumb.

This is where a ship will operate at the very edge of a warp scramblers range. It knocks out a micro-warp drive using ship, but also stays out of range of the bulk of returning fire. It's a much more delicate form of brawling, as opposed to the more common image of slugging it out with an opponent.

So lets look at some ranges and damage profiles. As before, I got my calculations from the Eve Uni-wiki. If anyone knows this is out of date, or simply wrong, please let me know!

Since we're looking at scram ranges, we'll only be comparing long range T2 ammunition in the biggest short-range guns that can be reasonably fit. This should give the best range achievable by a single hull. Of course, all these are T2 variants (as only these can fit the long range T2 ammuition types).

(Note: We could include faction T1 ammunition types, but they're typically inferior to the specialist T2 munitions for range)

I'll include example ships below for clarity. Many ships carry the same bonuses, and turret layout. If they carry additional drones, add +20dps for each drone (assuming Hobgoblin IIs). For a Rocket Launcher 2 secondary, add 18dps up to 10.1km (Navy rockets), or 15dps up to 15.2km (Javelin).

The damage shown is before any modules or rigs. Obviously the more damage increasing modules you put on the better! All skills to 5, for fairness.

Scram ranges highlighted in yellow, the first one cold, the second on overheat. The orange is disruptor range. 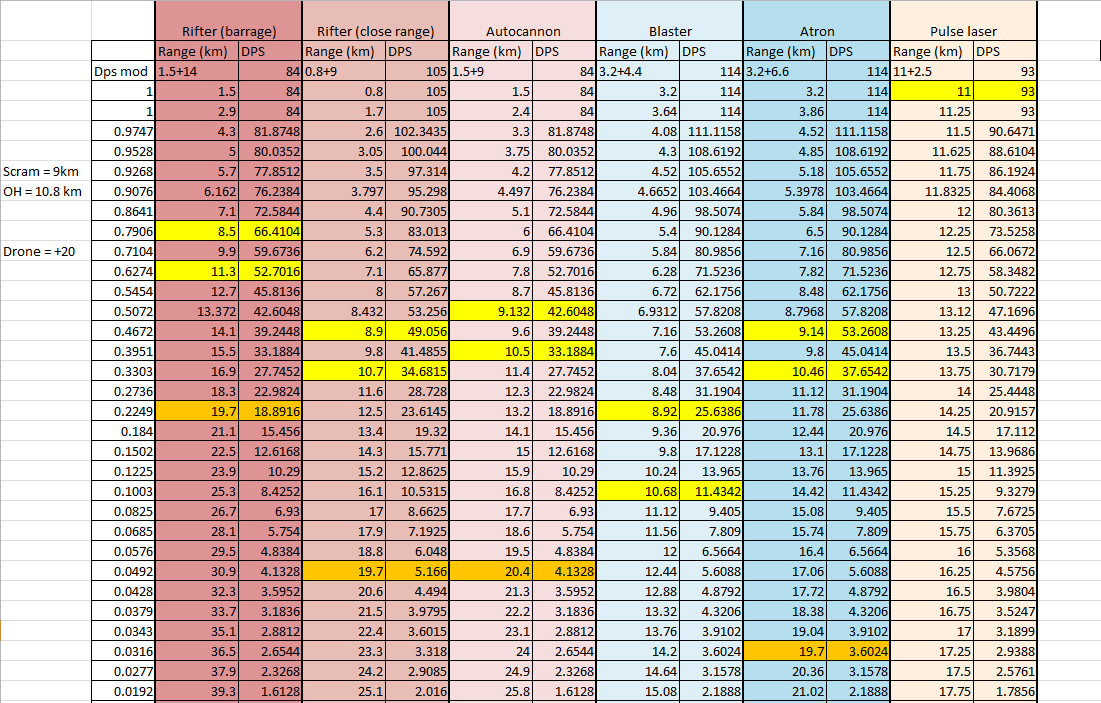 What follows is mostly my own opinion. If you disagree, let me know in comments!

Pulse lasers are clearly the best scram range weapon (but most of you knew that!). This damage projection offsets the natural slowness of Amarr ships, and gives the reason why the Executioner works as an attack ship. Coming in dead last are blasters, with projectiles in the middle. The Rifter with it's fall-off bonus comes in at 2/3 the firepower of pulses at scram range.

So yes, conventional wisdom wins out. Rifters should use keep blaster boats at range, and engage Amarr ships at point blank.

Incursus vs. Rifter is still skewed in favour of the Incursus. Adding the damage of the drone (30dps @ 11km) puts the gap between them at about 20dps. Which is great! But the Incursus with it's repair bonus can absorb that easily. It also comes a bit more cap stable than the Rifter, and usually more armour, meaning that in a war of attrition, the Incursus comes out just a little better the Rifter.

Tormentors are similarly protected by their drones at close range. Most carry a plate along with a holy trinity (propulsion, scram and webifier). Eve if you get under their guns, that's still around 40dps of fire coming in at you.

This can be remedied by putting a rocket launcher in the Rifters utility high. Work on your rocket skills to fit javelins (for range against blaster boats). You lose out on the cap warfare options (neuts and vamps) when you go close range, but it works out to be more flexible (i.e. useful in all engagements rather than one). Cap warfer will mostly be useful against laser boats, but with the Rifter's capacitor being what it is, you'll just cap yourself out before the enemy.

Tristans a little out of control right now. Just don't get involved. Your best bet is to go point blank and hope they're not blaster fit. Either way you have 100dps from drones coming at you, and that's pre-damage mod. If someone can explain to me their weakness, I'm dieing to know... Quite literally in fact.

It's also interesting to see that the Rifter's damage is quite respectable at disruptor range. Provided you're not hamstrung by electronic warfare, you should be able to do reasonable damage to those pesky T1 frigate kiters. Not a stellar amount, but enough to maybe make them think twice!

Which brings us to the scram range kiting Atron. According to the paper work, these are basically tied. You should try to keep your distance, and the Atron should try to get under your guns. Tracking comes into play too, but these fights will most likely end in one party escaping.

Looking at the pulse laser line, we can see that the Executioner is clearly the king of scram kiters. Keeping out at OH scram range, you even have a great chance against an Incursus. Of course, a number of factors come into play here (sig radius, resistances etc.) but in a 100 second extrapolated fight, the Exec puts out 9300 damage at scram range, to the Incursus' 3000. Not bad at all really!

Against a Rifter, the difference in tank makes this actually a reasonable fight. You won't be able to close the distance on them, but you'll be tougher, and a rocket launcher in the high slot might make all the difference. Weaving in and out of pulse laser fall-off might be the best option, tagging them with a scram when they look like they're about to escape.

On overheating scrams; yes, it does cut incoming blaster fire by half. Against an Incursus, that's not actually significant (because of the drone), and honestly, you'll just be cutting your own damage by the same actual amount. But against a Merlin, which has nothing better to do with it's low slots than damage mods, yes, it's good!

Against a Slasher, well, not that helpful. It's faster than you anyway. Just focus on ripping it's flimsy hull to shreds. Against an Atron, the difference is slightly in your favour, but you're going to have your hands full keeping him at range.

These are some ships you should avoid like the plague:

At scram range, all the rocket ships out-damage you, and realistically with webs and your guns suffering from tracking, they'll outdamage you at close range too. The Condor you may be able to slug it out with, but you're likely to be hamstrung by ewar. Kestrels are rather terrifying at all ranges, and I'm surprised more people aren't fielding them with an overdrive injector in lows to dictate range. The Breacher, again, shows itself to be a sheer marvel of Matari starship design.

I feel a little more confident about the Rifters ability now, and it doesn't need the overheating management of tackle modules suggested by many others. It helps in some cases, but shouldn't be standard operating procedure. Just keep an eye on your ranges, and make sure your scram has a base range of 9km or better. Realistically, the other ships I've mentioned aren't going to be fitting their biggest weapons, and the virtue of auto-cannon's low fitting cost means that the Rifter can.

A rocket launcher is most likely the best choice to put in that high slot. Leave cap-warfare to the sneaky gutter-fighting Slasher.

What's remarkable is just how well balanced the Rifter comes against the other frigates. Despite having a falloff bonus which suggests it to be a scram range kiter, it always has options. It's still the same flexible, jack-of-all trades it's always been.

Which I think is a problem. This post is getting huge though, so I'll leave why to next time!
Posted by Tabletop Teacher at 21:35