Whilst I'm neck deep in money making schemes, I'll take a quick break to talk about Rifter ammunition. I promised this months ago, and with the recent changes to the Rifter it became more achievable.

Before, ammunition selection for the Rifter was tricky. It's bonuses favored a close in style of fighting, which meant a variety of close range ammunition types, along with Barrage for dealing with blaster boats. I was all set for a comparison of resistance vs. damage types, which escalated quickly, since modular customization of New Eden vessels makes for a massive variety of resistance profiles.

That changed with the fall-off range increase. Or rather, my perception changed.

Lets look at the graph again, this time updated for the new fall-off bonus. 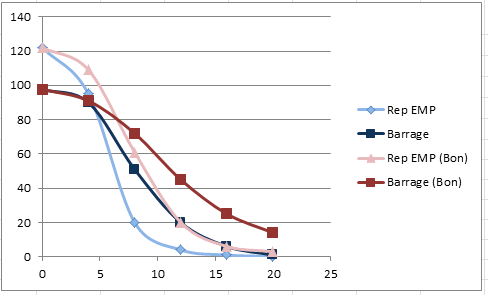 The new ammunition change point is about 7 km. If you're thinking this is a pretty good sweet spot to be orbiting, you'd be right. Just at scram range, and in deep fall-off for most blasters. If you're going quick enough, and can finely manage the distance, you might also be able to out-run rockets. Missiles have a travel time which limits their range. Rather than follow straight lines, they follow more of a 'chase' trajectory. If you're at the max range of rockets, they might not make it to you.

Regardless of damage type, you want Barrage for kiters.

The reasoning is simple. Unless you are very very confident you can catch a kiter at close range at the beginning of a fight, you will lose applied firepower getting into range. If a kiter managers to escape your grasp, you will also lose firepower.

If you are fighting any kind of blaster boat, use Barrage. You'll need to keep out of range whilst your superior fall-off range whittles them down. In the case of most blaster boats, this will mean a lot of whittling. Your biggest problem will be the Atron, as they have comparable range.These fights will be very close for you.

This hasn't really changed since before. The benefit now is that new Rifter pilots without access to Barrage have a much better chance of countering blaster boats. It also makes your fight more forgiving if you get jumped by one with your close range ammo loaded.

The above applies to rocket ships as well. Unlike a blaster boat, auto-canon firepower won't overwhelm your opponent. It's also more likely that rocket boats will be faster than you, and better able to dictate range. Load Barrage, and keep your damage application more consistent.

The only time you'll be using short-range ammo is when  you're fighting a pulse laser boat. These will typically fight within scram range, and you'll be able to use the Rifter's higher speed to close the distance. Your superior tracking will take over at point blank range.

These ships are Punishers, Tormentors, and Executioners. Looking at resist profiles for these ships, you're best off using explosive rounds. You may come across a Succubus, the Sansha pirate frigate... but honestly if you find yourself under threat from a pirate frigate in a Rifter, perhaps disgression is the better part of valour.

Conventional wisdom states that thermal is best, to avoid hitting a brick wall when it comes to resistance. The rules are slightly different for rockets, because you'll be using them at all ranges, and it's only a secondary weapon.

Summary of charges to be carried

Does this negate the damage type selection of projectiles? Yes, but to be honest, it's not that great a benefit in the first place. Unless you can be absolutely certain of your enemies fit and module layout, you invite catastrophic failure, rather than a tougher fight.

The advantage still has relevance in attacking the uniformly designed non-capsuleer pirates that infest New Eden, so it's not a total loss.

Before, with the Rifter's 25% tracking bonus, and AC reliance on fall-off, short range ammunition is preferred. This was smart, since ACs out-tracked most other turrets at close range, meaning a point-blank attack usually worked out well. Slashers are perfect for this tactic, with the speed to nip in under turrets and stick there, gently pricking their opponents to death.

The new Rifter might better benefit from the mid-range ammo. Deplete Uranium or Titanium Sabot both have a 20% tracking bonus, somewhat similar to the old Rifter tracking bonus. The damage is significantly less, but you'll be able to apply that damage better.

This is the best mind-set to have when piloting a Minmatar ship. It's not about the firepower you bring to the field, but the accuracy in how you apply it, and how best to avoid it.

I'll be testing out the effectiveness of fusion vs. depleted uranium on my own ships. If it works out well, I'll let you know.