Trade Log: Back to business and a few quick tips 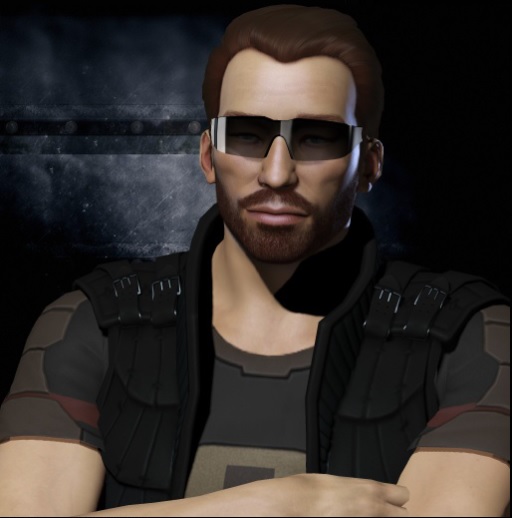 I do so enjoy fixing other people's mistakes. My former-master now-boss fluffed up his finances. Needless to say, it took me a whole 2 days to fix it.

For those of you who don't know me, I'm Benh Thanh, Behnid's former market slave.

So, as soon as Behnid joined the Tribal Liberation Force, I became a free man. With all the rights, privileges, and taxes that come with it. Apparently even mercs for the Matai forces can't own slaves, and his conscience was giving him the usual unprofitable pangs.

Which means that we no longer enjoyed those lovely tax exemptions on our trades. Ugh. Nothing worse than giving governments money. They rarely know how to invest it.

Slaves aren't taxable in the Empire. Any customs taxes that get put on my shipments need to be sent off to my master. As my Master was very difficult to track down (piracy and all that), the invoices got lost bouncing around the legendary Imperial Bureaucratic machine. The Republic also doesn't tax slaves. Anything you bring out of the Empire is considered liberated goods, and basically what you use to make a new life in the Republic. They also strongly hint it's a good idea to go back to the Empire and liberate more stuff.

These new taxes would seriously cut into my bottom line. So, I put my plan into effect.

My first step was to free my wife, posted in Amarr. Behnid managed to sneak her papers under the local authorities, and bam, free lady. With all the rights and privileges of an Amarrian subject to the crown. One of those rights being the right to own slaves.

Holder status is surprisingly cheap to obtain these days.

After that, I sold myself to my wife for the incredible price of 1 ISK. Well, at least that was the starting offer. She haggled me down to 0.01 ISK. God, I love that woman. So now, like all husbands, I'm a slave to my wife... just more literally so. And blissfully free of taxes on moving goods between the Empire and Republic.

I guess I shouldn't mention what category of slave I am. Let's just say I get to share the exotic dancer lounges in stations.

It took three runs from Amarr to Hek. Starting with 100mil liquid ISK, I bought a dozen or so stacks of, well, crap that no one wanted in Amarr, but was highly valued in Hek. Two days later, and we're looking at a PLEX within a week, with enough licenses to keep the Sir Chief Behnid, myself, and my wife in space.

Seriously, if you need a lot of cash in a hurry, and you're not afraid of travel, Region Trading is the way to go. It's even a little easier than when I first started. Frigates warp faster these days, and Industrials don't take forever to get going. I did the last 2 runs in a Wreathe. Never felt more secure carrying 100mil worth of stuff.

But I just want to share a quick tip I discovered. Made my life a whole lot easier.

It did add a lot of time to my trading though.

But did you know the market browser had a quick bar?

Using folders to organize what you region trade and what you station trade, you spend a lot less clicks going through your orders. Before, I'd go to my order page, get the menu open, wait for it to load, check back on my spreadsheets etc.

Now, I open up the market quick bar, and just scroll down to update my orders. Many of you are thinking, 'Duh, why didn't you do that before?' No one told me how, that's why. 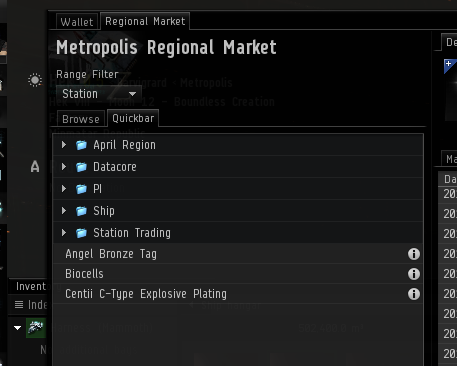 But something I did discover though, which was pretty nifty. You know you can add your own text notes to items in the browser?

I use this now instead of referring to my spreadsheets. If I find an item worth trading (which croda does so well in explaining how.. and which I tried to explain a while back), I just add it to quick bar, put it in the right folder, and note 'Buy". If I have the item already, I note 'Selling'. 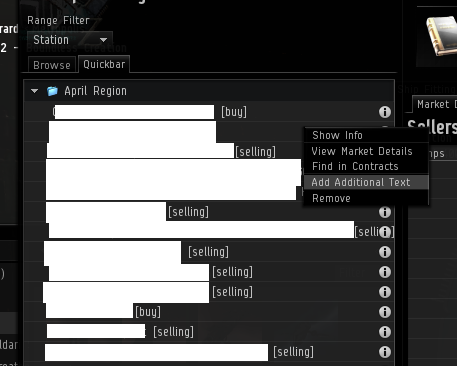 (Actual items censored to protect my investments. Do you own research you lazy bums)

How does this help? My wife in Amarr shares the same market browser as me. I don't have to keep referring to spreadsheets to see what I want to buy, or what I don't need to get more of. More time spent actually buying/selling, and less spent on fixing my terrible spreadsheet equations, is more potential profit.

Just a quick tip for your market noobies out there, and those who don't want to spend too much time crafting spreadsheets. Nothing better than good accounting though, so if you're serious about things, still make that spreadsheet. Some mercantile royalty types do seem to get along fine without though.

Now I need to go find the Boss. last I saw he was babbling something about wormholes and the profits there in, and trying to find his Astero keys.

Posted by Tabletop Teacher at 01:09